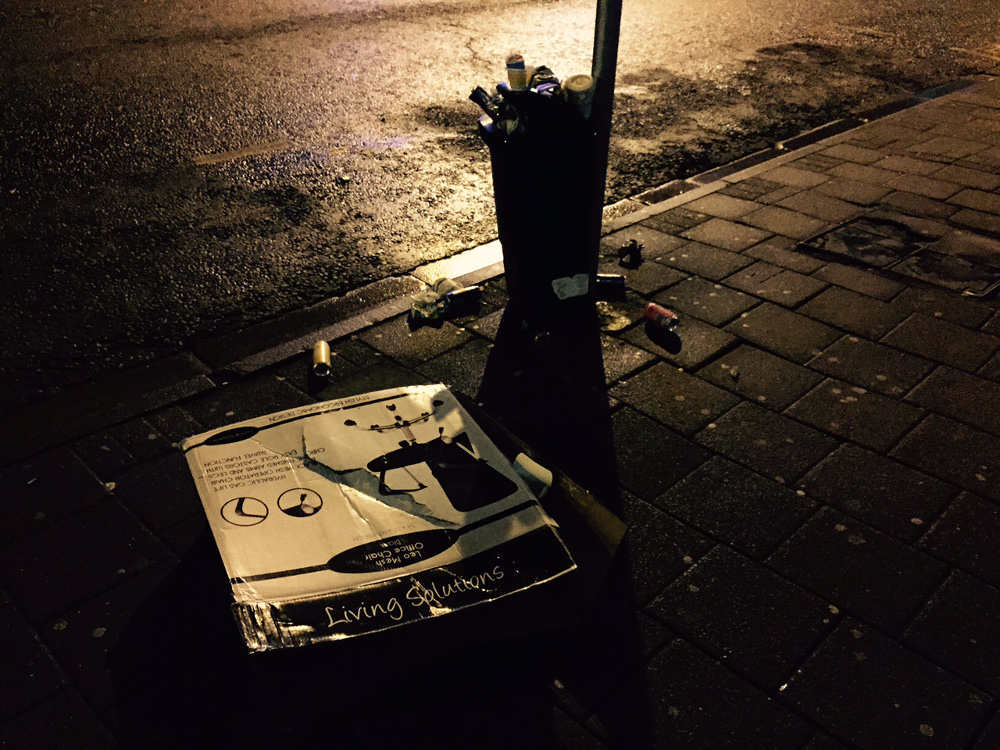 We were a little worried to see this at first, but on looking into what Roath is Rubbish is promoting, we’re 100% behind them.

Roath is a wonderful place, with plenty going on, but no-­one can deny it’s a mess: litter left on the street, bins put out on the wrong days and bin bags torn apart for the food inside by seagulls and ­ who knows – by urban foxes, and perhaps people?

We interviewed the people behind Roath is Rubbish, and here’s what they had to say.

Why have you started the Roath is Rubbish campaign?

“We just wanted to highlight the issues, walking round, on a day to day basis, we just realised there’s a lot of litter, and it’s been like it for years. Nothing’s really changed. I don’t think the system in the area has been reviewed for a long time. We just think something needs to be done.

“Walking round, I noticed there was a lot of litter, there’s a lot of business waste out and there weren’t that many receptacles for people to put their litter in, or that they were clustered in small areas, they weren’t distributed evenly along the streets. We didn’t have any evidence for this, so we walked up and down City Road and Albany Road and photographed every litter  bin along the way and pinned the destinations of the bins on a map.

“That was quite revealing really, because you get to see where everything was placed, and what you realise is, it doesn’t seem to have been thought through, or there doesn’t seem to be any rational plan. By Death Junction, there’s loads of takeaways ­ ‘let’s put all the litter bins there’ ­ like people don’t walk down the street, eating their food. It just seems completely illogical.”

Roath is Rubbish went on to say, that “you can rant and rave about these issues” and even “email the Council (and probably get ignored) or you can provide evidence that highlights the issue, and then it backs up what you’re saying.”

What are you trying to achieve?

“The main purpose of this campaign is to get more and better distributed litter bins on the high streets of Roath (City/Albany/Wellfield). We are asking the Waste Management Dept to sit round the table, with residents, to plan a new system. I think residents would design a better system because they really care about the area.”

What are you going to do to help the situation?

“So what I want to do is go to one of the councillors’ surgeries, and say, here’s the  information, what I’ve found voluntarily as a resident of this community. I’m fed up with walking round with litter all the time, and there’s a 100 odd people who support what I’m saying, on social media, and here’s what we’ve done off our own bat. The system’s not fit for purpose: can it be reviewed and can it be improved?

“We don’t think that’s too much to ask for, we don’t think it costs that much. The guys emptying litter bins, they’re there every day ­ if they just had to empty a few more, it’ll add to their workload, and the cost associated with it, but…

“There’s a need, isn’t there? For too long, Roath and Cathays have been viewed as just normal kind of neighbourhoods, when they’re not. They’re really quite unique in their demographic make­up, and people come here from all over the city to go out ­ have beers, eat food ­ and things like that; so it’s like going into a small city or small town centre, so we think that the system isn’t working properly, and needs to be reviewed and improved. This could be the first step along that journey.

“If it’s being driven from below then hopefully… I’ve no doubt the politicians will agree with what I’m saying, it’s whether we can get the officers to agree within the local authority. What we need is to prove there’s a desire, not just from me, and a couple of other people, but from people in the community, to change things.

“I think it’s just through sheer laziness that what’s happening, that no-­one’s really looking at this, and nobody cares enough. The people in the community care. There’s a waste strategy [in Cardiff Council], and a litter bin strategy, but from my perspective I don’t think it’s good enough.

“People are saying about behaviour change, and culture change: I agree. It’s not just about infrastructure and bins.

“Let’s get our house in order, get a system in place, and then we’ll start trying to do some campaigns and activity that attempts to educate the population, which is the hard part ­ the ongoing, continual work. Dotting the bins around is the easy part: long term behavioural change is difficult.”

We at RoathCardiff totally support what Roath is Rubbish is trying to do, seeing that our streets are often in a terrible mess. Give them your support, and see what they’ve been up to since we interviewed them, at facebook.com/KeepRoathTidy.