I’ve written this post on behalf of a large group of young males and females (some of us not so young anymore!) who have one common passion…the game of Basketball! Particularly the variety of the game played on summer days and evenings outside at local parks and playgrounds. This side of the game is where every age and level of player can come together and “shoot for teams” to play in a mixed age group, mixed gender and mixed ability “pick-up game” for all to enjoy.

I am the Head Coach (and player) of Cardiff City Senior Men’s EBL squad so through the season I play at a high level against some very good players and at a high standard of facility. However, during the off season we like to have some fun with no pressure of travelling across the country on a Saturday afternoon to a “must win” game. I (along with many of my team mates) like to go back to the grass roots off the play ground and simply play for the love of the game…and a bit of respect.

We do this at a local court set in the beautiful landscape of Roath Park. One of the biggest plus points of the Basketball court at Roath is also to its detriment, and that is its seclusion. I’m always surprised to hear how many people don’t even know of its existence. When the sun is shining, Roath Park is full of picnic makers, dog walkers, joggers and of course Basketballers. On any given day when the weather is good you can stroll down to the courts at Roath and get in on a game, be it half court or full court, there is some kind of game going on with a wide range of age and ability.

I’ve been frequenting Roath Basketball court for several years now and have made some new friends, met some old ones, set up rivalries (all friendly of course) and even recruited players to our set up over at Cardiff City. We have an excellent programme running over there with the help of the Football Club foundation and our U18 squad is flourishing with the new facilities. Many of who were first spotted playing at Roath and have since gone on to play at the highest level, representing their country.

Here’s where I come to my point: Roath Park is the perfect place for young, old, experienced and newcomers to join in a game on any day and become part of something bigger – Cardiff Basketball. Be it as part of one of the many organised teams in and around the City or simply a familiar face on a sunny day at the Park, its setting is perfect, its location is accessible and central, the park is safe and very well maintained. However, the court itself is getting very worn and we fear won’t last much longer as a place to play. Just last year, a tree fell taking out half of the fence which was left to cover a portion of the court all summer. This, along with the entire surrounding fence has now been removed and definitely needs replacing. Along with this we (the Basketballers of Roath) would like to see some investment put into the facility in the form or maintenance and improvements. The points we feel need to be addressed are the following: a new surrounding fence; any overhanging trees or bushes to be cut back; repainted court markings; new hoops (fully replace the pole, backboard and rim). 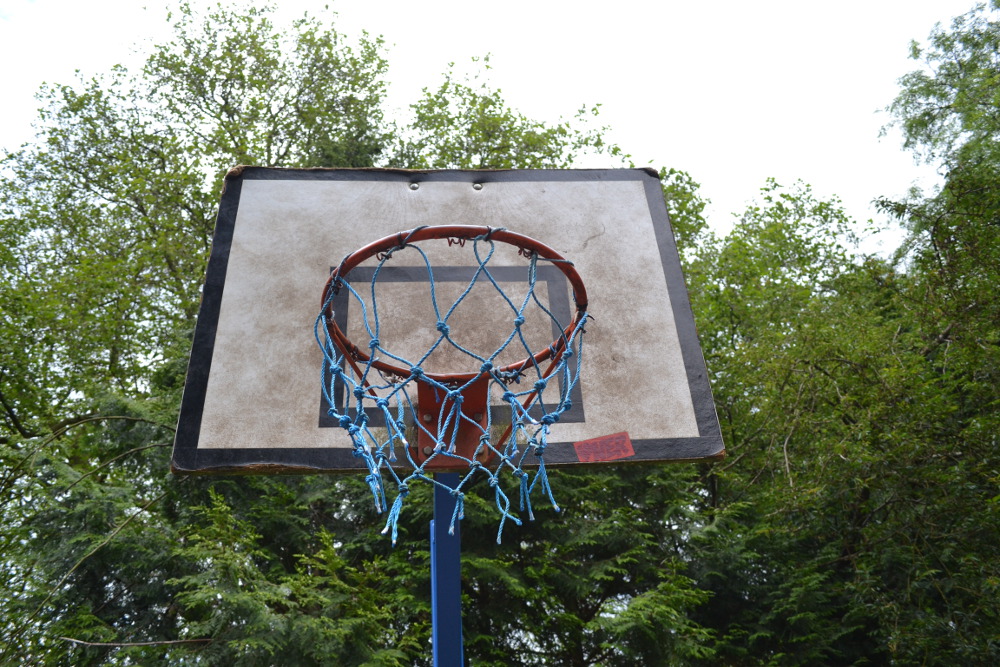 This is the worse of the two hoops but the other end of the court is almost unplayable at the moment due to the overhanging trees which cause dirt and moisture to settle on the playing surface, as well as preventing any shooting from that side….kind of integral to basketball.

For the amount of use the court gets and the people it attracts throughout the suitable months, we feel this isn’t too much to ask and would like you to consider any possible way you could make the changes needed to keep this basketball haven alive. 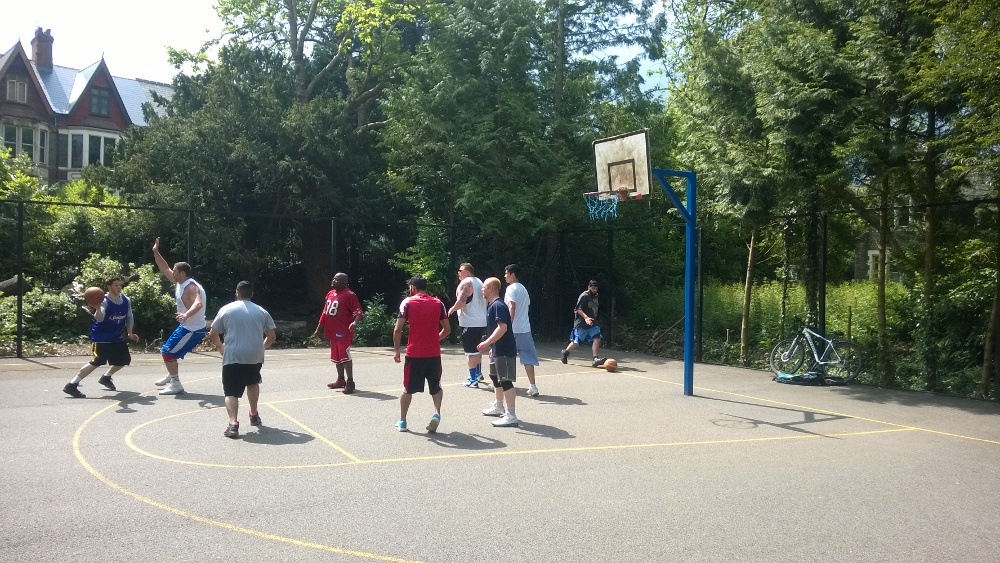 You can see in this picture that the fence is now missing. Last week I must have helped 3 different people retrieve their ball from the stream now there is nothing stopping them.

We would be over the moon to hear that someone already has plans in place to do this, or that after reading this you decide it is needed and would like to help. However, a small group of us are already prepared to do some of the work; we just need your support. We are prepared to approach equipment suppliers of the hoops needed and will even look into the other requirements but we are simply individuals who love the game and don’t have the money to invest ourselves but we are prepared to work to get it, via sponsorship, fundraising etc etc.

We’ve also had the idea for re-launching the court when this is all completed via a small tournament. I have been part of a large scale tournament in the north of England for over 10 years and would be happy to organise this. We could charge a small entry fee which would have to cover things like staff or insurance, and then any other monies can be donated to a local charity. We know enough referees in the area who would probably be willing to referee the tournament for free.

As you can probably tell, I (we) are very passionate about the game and getting this done as soon as we can, but we understand things don’t happen overnight. Any help, consideration, or work you do towards this would be greatly appreciated by the whole community and we don’t wish for any recognition, we just want to keep the tradition of sunny days at Roath Park alive.

Can you help, or do you know someone who could? Get in touch with Rich through the Cardiff City Basketball website or Facebook.