Thanks to Anne Bell for this guest post – it’s one of a series of articles by Anne about the history of Roath Park.

A botanical garden for Roath Park was originally suggested by the Cardiff Naturalists Society in 1887. Cardiff’s first municipal park was then in its early planning stage and the Council readily agreed that with a botanical garden the new park could be of educational as well as recreational value.

The above picture from a 1904 postcard shows a view across the Botanical Garden from Lake Road East a little south of the Promenade. When this part of the park was ready for planting in 1893, the recently appointed Head Gardener, William Pettigrew, put his proposals for the creation of the Botanical Garden to the Parks Committee:

The flowerless division of the vegetable kingdom should be represented by at least a collection of British ferns. Bog plants, and aquatics, as showing different phases of plant life, should also be represented by a few prominent types.

Again, no Botanical Garden is complete without a collection of trees and shrubs, although by no means requiring to possess an arboretum.”

A decade after Roath Park opened the Cardiff Council produced a detailed description of the new park. The Guide to Roath Park and Catalogue of Plants in Botanical Garden was published in 1905 and written by Pettigrew, by this time the Parks Superintendent. He described each of Roath Park’s “six distinct parts”, but the majority of the guide was devoted to the Botanical Garden, the main features of which were “its collection of herbaceous and medicinal plants, its Rock Garden, and its small though select collection of trees and shrubs.”

Pettigrew wrote that the main collection of herbaceous plants was to be found on the western side of the Botanical Garden, “grown in their natural orders, or, in other words … grouped together according to their tribes and families.” They occupied over a hundred beds, each 20 feet by 6 feet 6 inches. Some of the original plants were donated by Kew Gardens, and further gifts from Kew followed in later years, such that Cardiff acquired a Botanical Garden of national importance, and of interest particularly to horticulturists and students of botany. 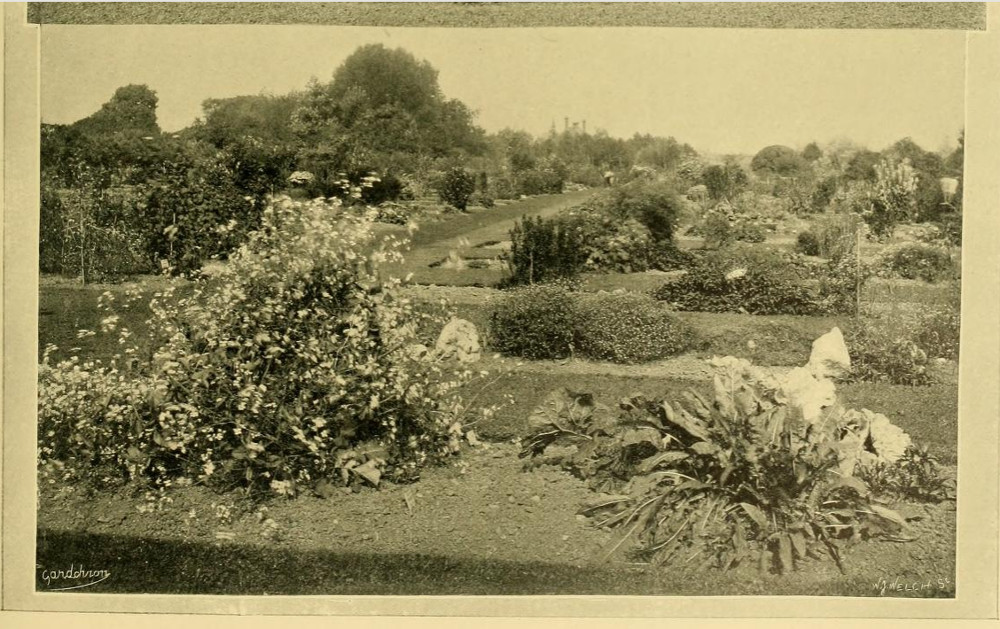 The beds with the herbaceous plants became known as the “Students’ Garden”, a photograph of which (shown above) appeared in the Gardeners’ Chronicle in April 1911. This part of the park is now occupied by the Rose Garden.

Pettigrew described the Rock Garden, shown below in a 1909 postcard, as a prominent feature of Roath Park in its early years. It was created on the high ground on the eastern side of the Botanical Garden, where the path still rises with rocks on either side. It came into being because most of the ballast used for path-making in the park was taken from there and “as it would have been very difficult to have used [the site] for any ordinary purpose it was converted to its present use shortly after the park was completed in 1895.” 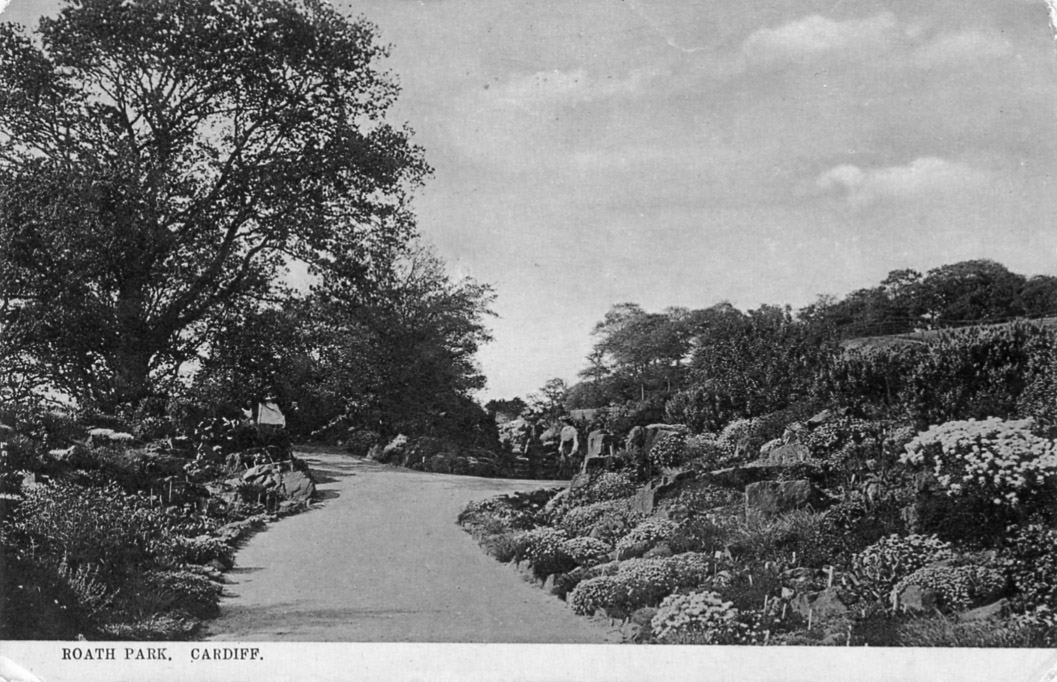 In the picture there is a small wooden stick visible beside each plant, indicating its name. To quote Pettigrew again: “Most of the plants are named but it is more difficult to be correct with the labelling here than in the beds [in the Students’ Garden] as it is so easy for evil disposed persons to misplace the labels without their being detected doing so. Indeed, so prevalent has this practice become that it has been found necessary to offer a reward for the detection of the offenders.”

A fernery was created between the Rock Garden and the Lake. In Pettigrew’s words: “Leaving the Rock Garden and proceeding in the direction of the Lake, the visitor passes into the Open-Air Fernery, which is mostly furnished with British ferns.” In the present day Roath Park some remains of the fernery can be seen on the slope leading down from the Rock Garden towards the children’s play area.

At the foot of the bank sloping down from the Rock Garden on the southerly side was a pond fed by a natural spring. Before the park existed there was a swamp in this position which was banked around when the park was laid out, to create a suitable place in which to grow marsh and water plants. In January 1895 this was described in a report to the Parks Committee as a bog garden in the form of an ellipse, covering an area of about 200 square yards on the east side of the brook.

The following postcard, dated 1936, shows the probable location of the pond and water garden, looking south towards the original glass houses (behind a hedge). It is difficult to place precisely in the present day park because the brook has since been straightened and moved westwards.

The present day conservatory stands on the approximate site of Roath Park’s earliest glass houses, built in 1905 and 1907 respectively. The first of these had to be created in some haste because the Council received a donation of 500 rare and valuable cactus plants. A special glass house was rapidly provided and was opened to visitors in May 1905. A much larger greenhouse (100 feet by 20 feet and 11 feet high) was added in 1907. This became known as the Chrysanthemum House because it housed a popular annual chrysanthemum display, the first of which, held in November and December 1907 attracted some 12,000 visitors.

Although no postcards have been located showing the historic glass houses, a photograph of the Chrysanthemum House appeared in Cardiff Yesterday No 12 (Stewart Williams 1985), along with a photograph of the “present day Tropical House” which replaced it in the early 1970s.

The early Botanical Garden also included an Aquarium and Fish Hatchery (described in a previous article) and a Meteorological Station, which Pettigrew described as a “small white box, standing on four legs, seen on entering from the main entrance”.

The Guide to Roath Park and Catalogue of Plants in Botanical Garden is available for consultation at Cardiff Library, Local Studies section.

Images from the postcard collection of Anne Bell, reproduced with permission