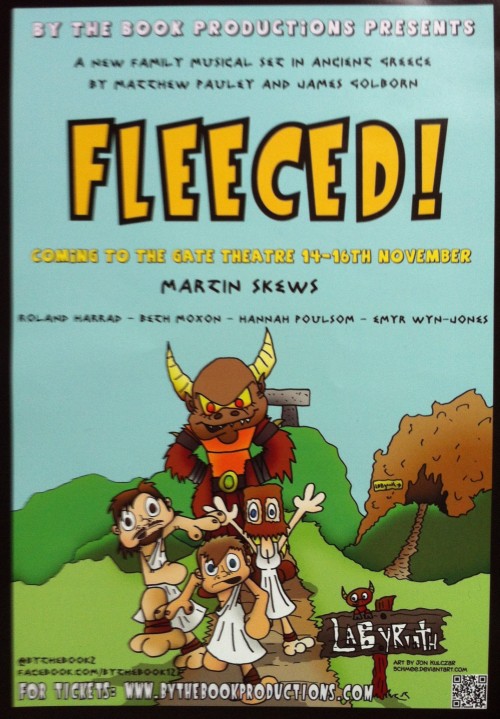 At first glance, the idea of this debut musical production written by Matthew Pauley, based on Greek mythology, with a few new characters thrown in for good measure, along with plenty of laughs and a brand new score by James Golborn, could have you seriously questioning the man’s sanity – or you could be intrigued.

Fortunately, we were intrigued, Fleeced! having first come to our attention when the group of talented young actors and singers, students at the Royal Welsh College of Music and Drama, sought to crowdfund the production through Kickstarter.

While I don’t pretend to be a theatre or music critic, I do like a musical – and even a rock opera – so I was delighted to be able to go and see Fleeced! at the Gate last night.

Still having a little trepidation about how the storyline might pan out, I was instantly drawn to the well-played and gently humorous characters, as the production opens with the hero Jersephules trying to persuade his parents, simple farmers, that it’s time he went out into the world and have some adventures.

After not much persuasion, it has to be said (there’s a lot of story to fit into the two hours of the show), Jersephules is off with his knapsack and on his way down the (no doubt olive-tree lined) roads to excitement.

Without giving away the story, let’s just say that Jersephules soon finds his first adventure, and in good hero style he seeks and finds companions to accompany him on his quest, in most entertaining ways.

Playing fast and loose with some of the best known characters from Greek mythology (and making them a lot funnier than they are usually portrayed), and with an action packed, tightly written script, the story is engaging and a lot of fun.

There are even more laughs in the second half than the first, and the characters are all well-defined and sympathetic (even the baddies!). The six piece band is fantastic, the score taking in quite a range of musical styles which are all expertly played.

You won’t be disappointed by the singing either: for those put off musicals by the frequency of singing (I know that sounds odd, but hearing everything in a story sung doesn’t always ring true), there is not only plenty of great acting as well, but the quality of the cast’s voices is outstanding.

They are trained singers after all, but the libretto is always clear, comprehensible, and contains all the best features of musical theatre – beautiful solos (one of my favourites was sung by lonely Medusa, played by Beth Moxon: ‘stuck on this island with snakes for hair’, and another the Ian Gillian-esque rock voice deployed by Martin Skews in the first half – well, Jesus Chris Superstar is my all-time favourite rock opera…), but also duets, harmonies, and everything in between.

All the performers deserve a lot of credit, and we’re sure you’ll be seeing a lot more of them in the future.

In short, this is a great show, and you still have two chances left to see it in the Gate today – a matinee at 2.30pm, and an evening performance at 7.30pm – so get your tickets here and prepare for one of the most entertaining odysseys you’re likely to be part of!

RoathCardiff was a guest of By the Book Productions and we saw Fleeced! on Friday 15th November.