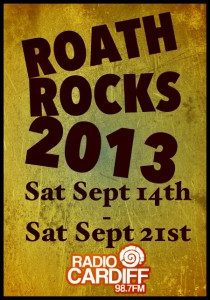 RoathRocks Music Festival returns this September with a great line up of bands and singers performing at a variety of venues in Roath and Cathays.

The week long festival will be showcasing some of the great talent in Roath and raising money for local charities each night. After the success from last year’s RoathRocks we have decided to go bigger and involve more venues to accommodate the volume of acts requesting to take part.

Here’s the gig listings for RoathRocks 2013:

Lawrence Made Me Cry 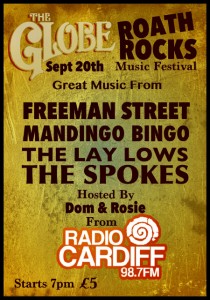 Live music all day including performances from Kevin Murphy and The Shrieking Violets.

More venues and bands to be announced.

The RoathRocks Gig at The Globe is hosted by Dom and Rosie from Radio Cardiff‘s Saturday Brunch Show.

“I’m really looking forward to this years RoathRocks, and the response from performers and venues has been amazing. It will be great to highlight the great talent here in Roath and raise lots of money for charity at the same time.”