Roath Cardiff > Posts > Arts & Culture > Surely You Can’t Be Serious? Why You Should Come And See Airplane!

Surely You Can’t Be Serious? Why You Should Come And See Airplane!

Surely You Can’t Be Serious / Funny Business / Why You Should Come And See Airplane! 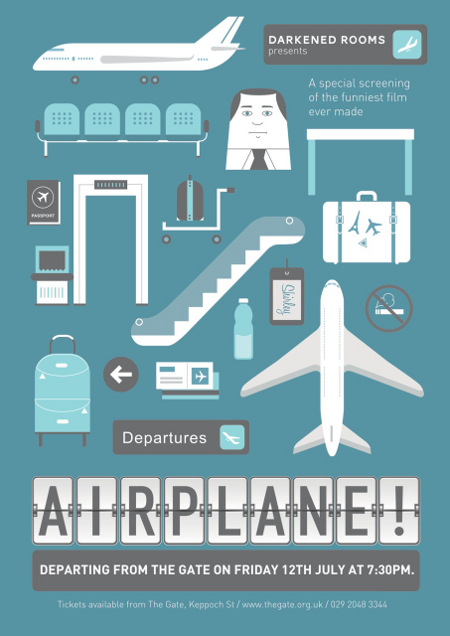 Comedies feel different when you watch them with other people. By different I mean better. Actually funnier. You’re more likely to crack up, laugh out loud, maybe experience mild bladder weakness if you’re part of a like-minded audience. It’s why sitcoms started out with laugh tracks – to make the viewing experience at home feel communal. [This post is part of an ongoing series wherein Tom points out the obvious.]

I particularly like watching older comedy films with an audience, especially if I/they have never seen them on the big screen before. It’s one of the most fun aspects of working on the ‘Darkened Rooms’ screenings. We showed Manhattan as part of our New York Night last year, and I’m a big Woody Allen fan, so I already knew it was funny. But it took my watching it in a ballroom with a few dozen strangers to realise it was funny. Joke after joke kept landing to collective chuckles. Same with the semi-obscure 90s caper Quick Change, which was the centrepiece of Bill Murray Night in February. There were throwaway lines in that I didn’t even notice were funny until I heard fellow filmgoers getting them. However, to be fair, I have been told that I am an idiot. Many times. Often by children.

This has all been an extended run-up to telling you the next Darkened Rooms event is going to be a screening of Airplane! at The Gate on Friday 12th July. You probably already know that this is one of the funniest films ever made, with a ridiculous amount of gags delivered per reel. It’s both incredibly smart and gleefully dumb. It put Leslie Nielsen in his first comic role, which is one of the great gifts to movies.

I don’t think it’s been shown publicly in Cardiff for quite a while, so this is a rare opportunity to catch it with a crowd. As a resident of Roath, I’m particularly pleased we’re showing it in the neighbourhood, and would love to do more of this kind of thing if enough people fancy it. And we have a surprisingly elaborate and Airplaney presentation planned, just so you know.