‘Safer Routes and Communities’ (part of Enfys, the Cardiff Cycle Network) has recently delivered leaflets to homes in the immediate surrounding area of Claude Place, informing residents of a consultation that would involve either closing it at one end, or making the street one way.

We also have doubts as to whether the proposals would improve safety when travelling to Marlborough Road School, as the proposed pedestrian crossing on Albany Road could be installed without affecting Claude Place, and there is also an existing zebra crossing on the other side of the junction across Albany Road, outside the Claude Hotel.

We’d like to see accident statistics for this junction, and some real evidence for the proposed changes.

Also it seems that only the residents living within a short distance of Claude Place have been invited to send their comments to Cardiff Council, when any change of this kind would have an impact on people living not much further afield within Roath and Penylan, as well as visitors to the area. 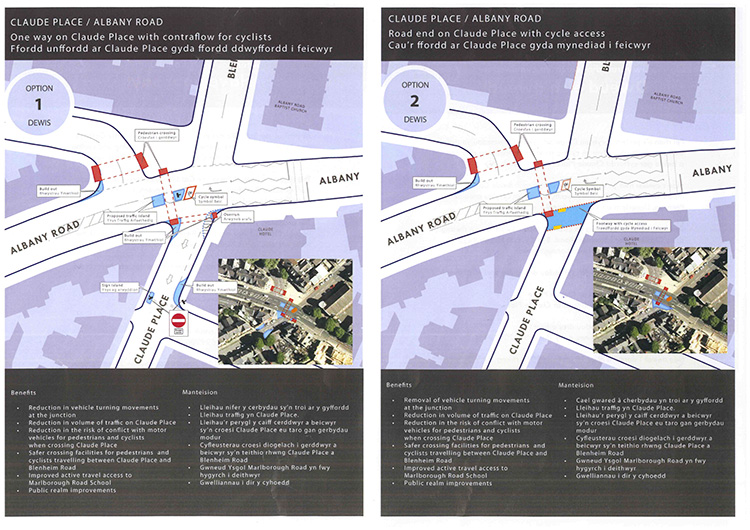 This was also the case with the Donald Street closure consultation, since only the immediate residents were informed (although Safer Routes and Communities were present at Roath Farmers’ Market in January to receive public comments) – yet the impact of closing one end of Donald Street, moving parking bays from the front of Tesco on Albany Road and allowing that to become a loading bay for deliveries would have an enormous impact on residents and shoppers from a wide area – not just those living a few metres away.

We understand that these proposals did not even win favour from Albany Primary School, who foresaw increased traffic at the side of the school, with cars turning in a small space, thus making matters worse for the children who attend the school.

In short, the proposals seem ill-thought out, and destined to result in a more chaotic junction than already exists – and a Claude Place closed at the Albany Road junction will surely lead to people from the pub gathering outside in greater numbers, causing nuisance and annoyance to residents and pedestrians?

Are you a cyclist in Roath? A parent of a child at Marlborough Road School? Or anyone or walks or drives around Roath?  Tell us what you think – comment on this post, tweet us or get in touch on Facebook.

Comment on the Claude Place/Albany Road proposals by emailing the Council’s Cycling Officer, or call 02920 873254 by Friday 21st June.

Although the Donald Street consultation is now closed, you can still send comments to the Cycling Officer by email.

Safer Routes in Communities will also be outside The Bottle Shop, Pen-y-Lan Road between 3pm-7.30pm on Tuesday 18th June to note your comments.

A map of all the proposed cycling schemes in Cardiff is available on the Enfys website here. 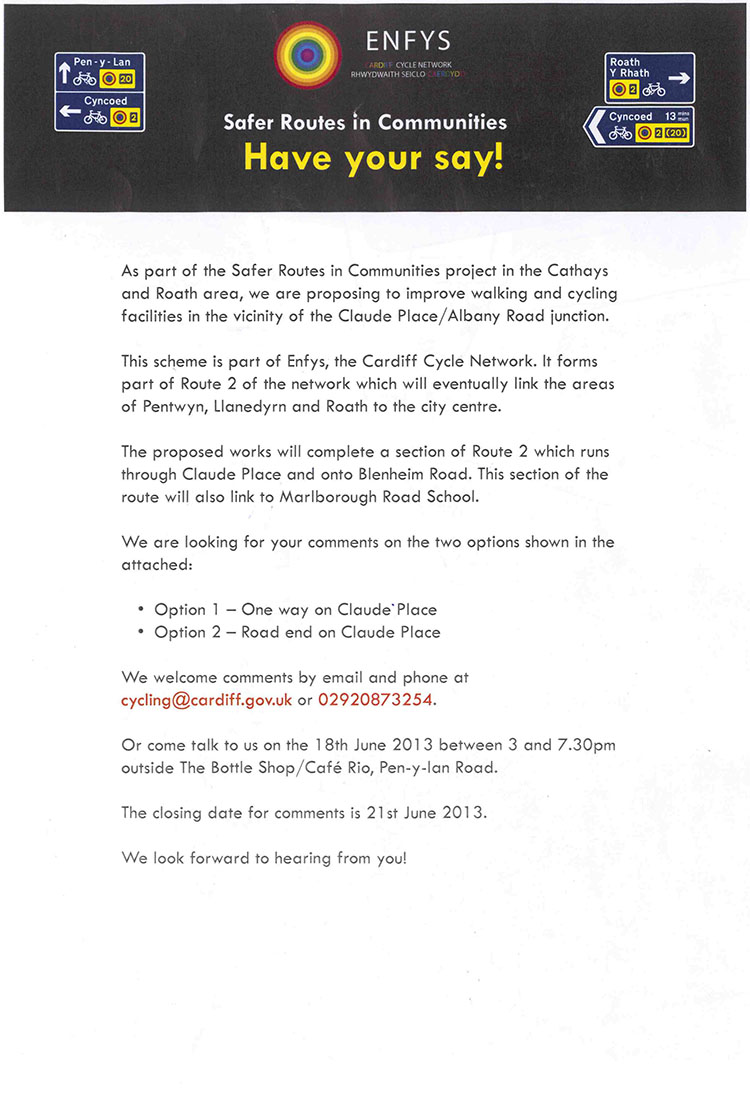