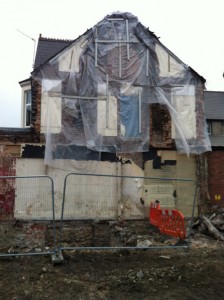 On Wednesday we visited the site of the former A G Meek’s building on Albany Road, to find it now completely demolished.

Speaking with the building foreman, it appears many of the older Roath residents have been regaling him with tales of how Meek’s was one of the first shops in the area (they had been trading on Albany Road for 100 years in 2012).

The builders have taken down the entire premises, ready for a Sainsbury’s to be constructed – by June we’re told – building these days taking much less time than in days gone by, and especially as a lot of it will be a steel construction with a glass frontage.

Residents in Angus Street have reportedly been making their concerns and anger about the road being closed for an extended period to the builders, and they will be suffering this for some months to come.

Despite not finding any artefacts of historical interest when demolishing the store, the foreman told us that they thought the site might once have been a pub of some kind, as near to the end of the demolition process they found a substantial cellar, with outlets to Albany Road that could have served to deliver barrels of beer; and steps down from ground level, indicating that the cellar was certainly used on a regular basis.  Perhaps it was used in wartime as a shelter?

Do you have any information about this?  Please ask your older relatives and neighbours – we’d like to get as much information as possible, and if you have any photographs of Meek’s or any business the site hosted before then, we’d love to see those too.