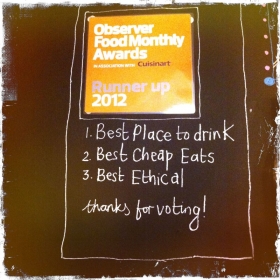 Fabulous local bar and restaurant Milgi Lounge has been voted runner-up in the prestigious Observer Food Magazine Awards 2012 in no less than three categories.

In categories voted for by the public (the Reader Competition attracted 16,000 votes), Milgi came runner-up in the categories of Best Ethical Eats, Best Cheap Eats, and Best Place to Drink in this year’s awards.

Milgi famously – and successfully – ran an open poll by a number of methods in 2011, to find out whether customers would prefer them to continue to be an ethically sourced restaurant including meat, or whether they should become a vegetarian restaurant.  The poll was overwhelmingly in favour of it becoming solely vegetarian, which they have become.  Not only sourcing their food from local farmers’ markets, but also foraging for local produce, Milgi has become an inspiration for those seeking ethical and locally sourced ingredients.

Branching out this year into running pop up Hedgerow Bars at National Theatre Wales events and at the Made in Roath Festival 2012, Milgi’s menus are consistently inspiring and interesting, and demonstrate the enjoyment and variety to be had from eating a meat-free diet.

Combined with their continuous commitment to art in the community, their regular Northcote Lane markets, and a huge number of arty events in their yurt, what’s not to like?

« Our online shop is open!
Charity shops – what are they good for? »