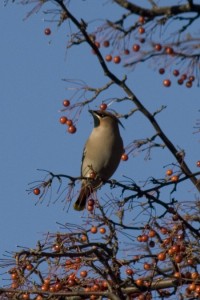 On Saturday, Roath saw an extremely rare phenomenon in the world of birds.  A flock of waxwings (or more correctly, according to the website New Zealand Birds – an earful, a grosbeaks, or a museum of waxwings), alighted onto the trees at the corner of Albany Road and Roath Court Road.

A sizeable ‘click’ of photographers and bird watching enthusiasts crowded around the trees to view these beautiful little birds, and record their visit.

Clearly, from the reference to New Zealand birds, the fact is that waxwings are not native to the British Isles, a relatively small number of them choosing to over-winter in the UK (no more than 100, the RSPB report) – but also their usual UK habitat for the winter is the east coast of Scotland, East Anglia, and the east coast of Northern Ireland.  They are not usually seen in Wales at all. 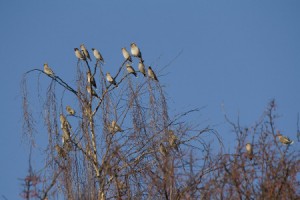 A twitcher might be able to identify the Roath waxwings more clearly, but comparing these photographs taken on Saturday, and those in this article on The Guardian’s Environment Blog, published only two days before the sighting here, it seems that they were Bohemian Waxwings, which live in forests in northern Europe, Asia, and western North America.

‘Waxwing winters’, says Matthew Oates in the article, ‘are not common’.

So, keep an eye out for these distinctive birds visiting the area, looking for berries to eat and sustain them through the cold winter months. Let us know if you see any!