The Gaiety – or SPIN Building – on City Road has long been abandoned, despite many in the Roath area calling for it to be brought back into use as a community resource.  Suggestions have previously included: a space for creative businesses, an arts centre, an independent cinema, a theatre, circus school or mosque (see my guest post on Guardian Cardiff, Creating Cardiff: thinkARK’s anti-quiz questions future of the city (January 2011)).

The building is currently occupied by ‘The Gremlins’, a self-styled anarchist group who aim to not only raise awareness of the empty building, but to begin hosting free community events.

Last month, we featured Nick Pritchard’s story Inner Spin: Inside the City Road Squat about the squatters, and his exploration of the building accompanied by members of ‘The Gremlins’. 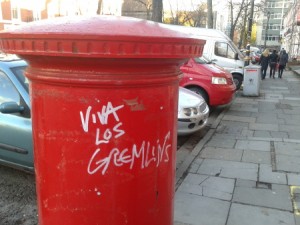 Nick has investigated further into what’s happening at The Gaiety, and the kind of events that have been held recently, and in his latest blog post Love and Rage, he poses the question, ‘Can the City Road squat become a Community Centre?’

Using photographs, a history of The Gaiety, and interviews with ‘The Gremlins’ and members of the public, the article gives us a comprehensive insight into the current issues.

So, what do you think?  Can the squatters be the catalyst for bringing this building back into use?

Get in touch with us on twitter or facebook, and respond to Nick’s poll on his blog Offbeat Cardiff here.

Cardiff squatters ‘The Gremlins’ have been resisting eviction in the abandoned Gaiety on City Road since October this year.

Their eventual aim is to make this building a part of the community again by opening it up to the public as a community centre.

Who are the gremlins?

The gremlins are an anarchist group based in Cardiff. They can often be seen on City Road with their faces covered up, coming to and from their squat….continue reading…