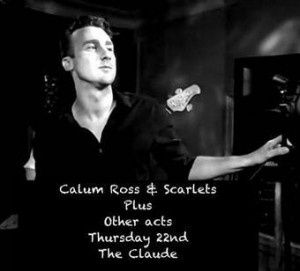 We’re sorry to announce that the organisers have had to cancel this event.

Calum Ross and the Scarlets and other local artists will instead play The Claude on Thursday 22nd November, and will still be fundraising for Velindre Hospital on the night.

An amazing soul/pop singer based in Iceland (the country not the shop) heard about the Rock4Life fundraising events through twitter and facebook. Alan Jones got in touch with me and asked if he could come and perform at one of our gigs.  After hearing his music, I thought he would be great for Rock4Life, and went ahead with arranging the next gig.

So he’s travelling from Iceland this week just to perform at our gig. He is an absolutely amazing talent who reminds me very much of Stevie Wonder. This is social media working in a really positive way.

He’s struck up some good friendships with Tuan at The Globe and local singer Krystal Mills too, and between us all we’ve arranged this month’s Rock4Life around his three day visit to the UK.

The gig will be on Wednesday November 21st at The Globe, starting at 7pm with performances from great acts such as Yasmine Davies, Gabby Early, Calum Ross, Matthew Wilson, Krystal Mills, Coming Arizona and of course headliner Alan Jones.

This is the fourth Rock4Life gig and all money raised will be going to Velindre Hospital.