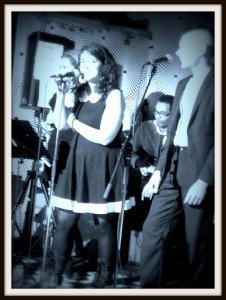 For those who remember Roath in the ’80s – especially if you were a teenager back then – and if you want to relive those glory days for a couple of hours, check out ‘Rude’ – a musical featuring all the old haunts and the sound of that period – written by local man Tony Wright.

I went to the opening night (it is running until November 3rd). It’s a high-speed run down memory lane – Cardiff-style – that took me right back to the early ’80s – the fun, the danger, heartache, the sounds, the moves and the mania.

Tony Wright’s show takes us back to a particular night – December 8th 1980. The story is based upon Tony’s own experience of growing up as a mixed-race boy around Adamsdown.

A self-styled Cardiff ‘Rude Boy’, Roddy is caught up with the Caribbean-influenced culture of Ska music – the sharp suits and Trilby hats often sourced from local charity shops. The action follows Roddy and the people close to him, and takes in the excitement of the time when all youngsters wanted was to escape the relentless pressure to find a job and when socializing when you had no money was about nursing one cup of tea in a smart café dreaming of success, adventure and romance.

Groups like The Specials, Madness, The Selecter, Bad Manners and UB40 played hugely popular gigs in Cardiff that many teenagers in the area attended. The events also attracted gangs and skinheads, with often viciously-violent finales that spilled out onto the streets.

Rude evokes all of that – and more – in a whistlestop tour of Cardiff in the 80s – from the dreaded dole office at Heron House on Newport Road to the thrill of the makeshift blues clubs in the city.

Rude – a Ska Musical – by Tony Wright – ‘Give it a Name’ Productions is directed by James Williams.

The show refers to many areas familiar to kids growing up in Roath. It’s on at the Rockin’ Chair, Lower Cathedral Rd, Riverside, Cardiff, Oct 24 – Nov 3 2012. Contact Chapter Arts for tickets.

Journalist and blogger Sarah Hoss is a Cardiffian who was taught at Marlborough Road and Howardian High School and raised her family on Arabella Street before moving down to west Wales. With lots of family living in the ‘diff Sarah doesn’t need much of an excuse to come back to her stomping ground. This post was inspired by one recent sortie Sarah made to attend a musical that immortalises Cardiff’s Ska music scene in the early 80s.

This article was first published here.