Tiger Bay Brawlers – premiere of ‘Derby Baby’ at The Gate

As if that wasn’t enough activity since the league formed in April 2010, they are now holding the Welsh Premiere of Derby, Baby!, a film described by its makers as “a story of love, addiction and rink rash”. 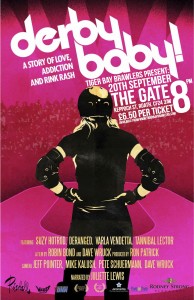 Derby, Baby! is a feature-length documentary produced by Emmy Award-winning filmmakers Robin Bond and Dave Wruck.  They take an international journey through modern-day women’s roller derby exploring its rapid growth across the world.  The film explores the drama, friendships and addictive nature of roller derby, exploring the sport’s roots since its inception over 75 years ago!

I manage the PR and Marketing for the Tiger Bay Brawlers, and inevitably those of us involved with the league – whether on or off skate – love roller derby.  We appreciate not everyone understands the addiction but Derby, Baby! promises to explore that element of roller derby and we’d love to share it with derbyists and non-derbyists all over Cardiff!

Modern day roller derby is not the scripted, hyperbolic theatre show it once was.  Skaters of today are athletes bonded by their love of the sport they have created and continue to nurture.  The derby community is tight but the competition between leagues is tighter, owing to the growth the sport has experienced over the past decade.

Women’s flat track roller derby is the fastest growing sport in the world so join the Tiger Bay Brawlers for this one-off event to find out why!

The Welsh premiere of Derby, Baby! is on Thursday 20 September at The Gate, Keppoch Street, Roath from 7:30pm. Tickets are just £6.50 and available from www.tigerbaybrawlers.com. Limited tickets may be available on the door.