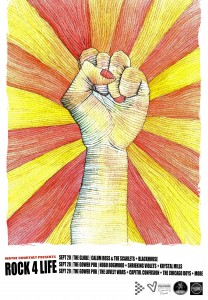 Some of Cardiff’s finest live acts are performing throughout September and October in a series of Roath and Cathays charity gigs called Rock4Life.

The bands will be helping to raise money for Cancer Research UK and Velindre hospital and the gigs are being organised by Wayne Courtney.

20 September, The Globe with Calum Ross & The Scarlets and BlackHouse

The Chicago Boys will be making special appearances at certain venues and more dates, venues and acts will be announced very soon. We will post updates as we have them or follow Wayne on twitter for more details.

It will be pay on the door with all money raised going to the charities.

Poster designed by Ani, lead singer of The Lovely Wars