The wreck of the ship Terra Nova, belonging to Captain Scott and his team, and used to transport them on their ill-fated expedition to the Antarctic, has been discovered near Greenland, the BBC reports. 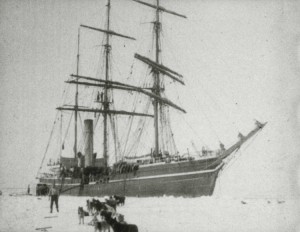 The Terra Nova departed from Roath Dock in Cardiff carrying the British Antarctic Expedition team in 1910, and whilst the team reached the South Pole in January 1912, they had been narrowly beaten by the Norwegian team led by Roald Amundsen.

The entire team perished on the return to base camp.

The well-known Roath Park lighthouse, built in 1915, is in fact a memorial to Captain Scott, and contains a scale model of the Terra Nova.  The park’s lakeside café is also named after the famous ship.

Read more about Captain Scott and the Roath connection in our earlier post: Roath Park and Captain Scott, and about the history of the Terra Nova on the National Maritime Museum website here.