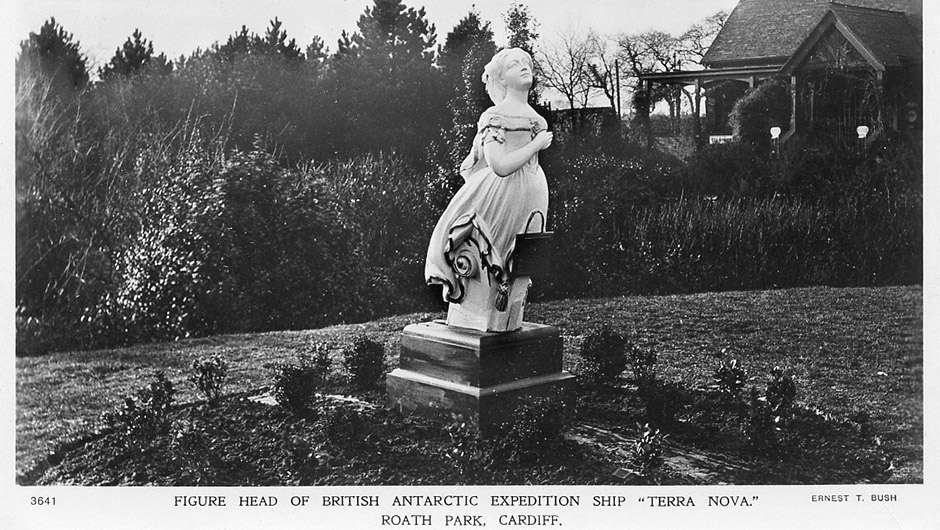 Captain Scott’s expedition to the Antarctic set out from Roath Dock aboard the ship Terra Nova on June 15th 1910. The unusual choice of Cardiff as the departure point was due to the exceptional contribution of the City to the expedition’s preparations and financing, a relationship that also accounts for the presence of the Scott Memorial in Roath Park, as well as the present day café called Terra Nova at the western end of the Promenade.

The close association between Cardiff and the expedition originated with Scott’s second-in-command Lt Edward Evans, whose Welsh connections secured support from the Western Mail editor W.E. Davies and other leading citizens in Cardiff, such as the ship owner and coal exporter Daniel Radcliffe. Davies is thought to have persuaded the Chancellor of the Exchequer David Lloyd George to contribute £20,000 to expedition funds on behalf of the government. The people of Cardiff gave some £2,500 (out of total national subscriptions of £14,000) towards the cost of the expedition, and a similar amount in supplies and equipment.  In addition the City provided generous hospitality to members of the expedition in the days prior to departure, including a farewell dinner hosted by the Cardiff Chamber of Commerce and a reception at City Hall at the invitation of the Lord Mayor.

When Terra Nova returned in June 1913 the ceremonies were of a more sombre nature, Scott and his four companions having lost their lives on their return journey from the South Pole. Terra Nova was restored to her former owner, Bowring Brothers of Liverpool, who agreed to give the ship’s figurehead to the City, at the request of the Parks Committee. The figurehead was placed in Roath Park, on the southern side of the Promenade, where a formal presentation took place on December 8th 1913. Mr F.C. Bowring, in his presentation speech, announced that he wished to donate a clock tower as a permanent memorial to Scott and the 1910 British Antarctic Expedition.

The wooden figurehead (pictured above) could not stand in Roath Park indefinitely without being damaged by weathering. In 1932 it was given to the National Museum of Wales and was displayed in the Maritime Museum in the Cardiff Docks. The figurehead remains in the Museums’ collections and was part of the “Captain Scott: South for Science” exhibition earlier this year.  It also featured in the BBC production A History of the World in 100 Objects

The proposed clock tower became the Scott Memorial, the lighthouse at the south end of Roath Park Lake. The Lake was emptied in 1914 in order to build foundations for the tower, which was completed during 1915.  John Smith Clockmakers of Derby produced a clock for the tower.  On October 14th 1918 it was officially presented to the City, again by Mr. F.C. Bowring.

A plaque was placed on the side of the Memorial facing the Promenade:

To the memory of
Captain R. F. Scott C.V.O. D.S.O. , R.N.
and his faithful companions
Captain L. E. G. Oates, Lieut. H. R. Bowers R.I.M.,
Dr. E. A. Wilson and Petty Officer Edgar Evans R.N.
who sailed in the S.S. Terra Nova from the Port of Cardiff
June 15th 1910, to locate the South Pole; and, in pursuit of
that great and successful scientific task, laid down their
lives in the Antarctic Regions. March 1912.
“Britons all, and very gallant gentlemen”.
Erected and presented to the City of Cardiff by
F. C. Bowring Esq., J.P.
1915. 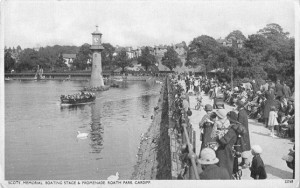 As Roath Park’s best known feature, the Scott Memorial has been pictured in many postcards.  The one above, from the 1940s, is especially interesting because of the message on the back. Signed “H.D.Evans”, it reads: “This one of the Lake shows the clock tower & you can see the plate with the names of Capt. Scotts party which sailed from Cardiff to the Antarctic. I made the pattern & cast the bronze plate in 1912. It is quite decipherable from the Prom.”

A full account of the involvement of Cardiff in Captain Scott’s Antarctic expedition is given in: