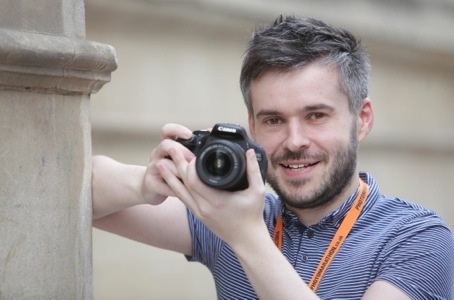 A graphic designer from Cardiff has been crowned the winner of Photomarathon UK 2012, with his photographs taking pride of place in the newly launched Photomarathon Exhibition.

Carwyn Jones, 30 from Pontcanna, beat 399 other contestants to secure the coveted first place of overall winner, by impressing judges with his interpretation and execution of the 12 topics that were set as part of the Photomarathon competition.

The topics that participants were challenged with photographing were: My Entry Number & Celebrate, Press, Friendship, City Life, My Favourite Thing, The State We’re In, Handmade, Truth, Out of Place, Silence, Established and Smile.

Upon hearing the news that he had scooped first prize, Carwyn Jones said: “This is the sixth time I’ve entered Photomarathon, so it’s fantastic to actually win it. I’ve won a topic before, but really didn’t expect to win the overall competition.

“I’m particularly thrilled to win the Canon camera as I’ve had my eye on a similar one in the office for some time, so to win one of my own is just perfect.

“This is the first time I’ve set out to try and maintain an overall style and creative approach – and it’s clearly paid off. I really didn’t expect to win. “

Now in its ninth year, Photomarathon is the competition which sees participants take 12 images on 12 given topics over the course of 12 hours, with all 12 images must be taken in the correct sequence. This year’s event was a sell out once in a record six days with 400 people taking part on 16 June.

Judges then had the painstaking task of choosing one overall winner and 12 topic winners from among the 4,800 photographs that were submitted.

Now members of the public can have the chance to see the results in a free three-week-long exhibition from 21 July – 9 August at Cardiff Story Museum in the Hayes, Cardiff. Every single image taken on the day will be displayed, along with the winners of the competition.

Roath resident Betina Skovbro is a Photomarathon director and judge. She said: ‘‘Every year, we are impressed with the standard of entries and the creative way in which people have interpreted the topics that we set.

“This year was especially challenging as the wet weather added an extra dimension to it all! However, as with past Photomarathons, everyone entered into the spirit of the competition and it didn’t seem to dampen people’s enthusiasm or the final results.

“Picking the winners is always a very tricky task – there are so just many inspirational photographs to choose from. However, we were particularly impressed by Carwyn’s set of photos. Each image was strong on its own, but there was also a consistency of style and approach across the whole portfolio, which gave a real sense of authorship. Maintaining that level of quality across the 12 hours of Photomarathon is no easy task – and Carwyn’s pictures captured the spirit of the event perfectly.”

The judges of Photomarathon UK 2012 were organisers Betina Skovbro, Mathew Talfan, Caroline Taylor and Simon Murray. The guest judge was Carole-Anne Davies, Chief Executive of the Design Commission for Wales.