Adam Care went in search of a little-known local landmark…

The crisscrossed terraces of Plasnewydd are not immediately where you’d expect to find a hidden gem like the Rose Street Flea Market.

South of Roath Park the lattice of streets between City and Newport Road are more often seen lined with discarded mattresses and upturned wheelie bins than rare collectibles and antiques, but nestled between the rows of student housing sits an unassuming double garage that houses a surprising interior.

Despite outward appearances this standard-looking house is home to the Rose Street Flea Market, two storeys stuffed from floor to ceiling with vintage furniture, artworks, records and books. Getting to the top of the building takes nimble footwork, as you scramble past old television sets, piles of faded annuals, and long-defunct typewriters.

In what was once an attic, Victorian dressers stacked high with fine china and long-forgotten toys, hefty cupboards, rusted bicycle frames and even old engine components are stacked to the rafters, covering almost every inch of peeling plaster on the walls.

The eccentric owner, who introduces himself as Frank ‘Steptoe’, has worked in junk shops since he was 15, and 37a Rose Street represents a lifetime’s work. 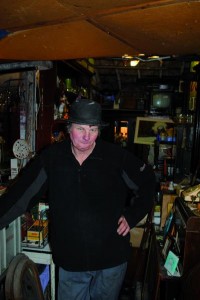 Originally from Coventry, Frank moved to Cardiff 45 years ago and has been attending house clearances and flea markets ever since. His career started as a mechanic, when he owned his own garage and salvage yard, but as car engines became more complex he found himself concentrating more and more on his private collections.

The Rose Street market was first opened in February 2011 as a monthly affair, but increased interest and repeat custom has led Frank to open his doors every weekend. He can be now found in his trademark battered bowler hat, every Saturday and Sunday between 10am and 4pm, showing customers around as his personal vinyl collection plays from a weathered 1970s record player.

Frank still attends the occasional garage clearance, but now finds more often than not that items come to him; word of mouth among his growing number of regulars has seen to that. He said: “I don’t have to look for it anymore, because now I know so many people.”

Plans to expand the site are already in progress, with one room at the very back of the building earmarked for a museum to showcase Frank’s private, not-for-sale items, including his collection of antique tins and packets.

Amid the chain pubs and takeaways of the student-heavy district, Frank’s market seems out-of-place, and he is certainly in no hurry to publicise its existence, preferring instead to rely on his own network of suppliers and traders to keep it ticking over.

This independent spirit shines through, and in an area of high population turnover and constant reinvention, such a commitment to preserving the past acts as a powerful beacon in an otherwise drab and predictable landscape.

Adam Care is a trainee newspaper journalist at Cardiff School of Journalism, Cardiff University, and is patch reporter for Plasnewydd.

Pupils and teachers from Roath Park Primary school are launching a new cafe space – ‘where...

« Roath Indie Business: Inner City Pickle – Eira Ellis-Evans
What do you love about Roath? Mapped at Made in Spring »