The Great Roath Bake Off – a great success

On Saturday night in a packed Coffi House on Wellfield Road, 35 of Roath’s best bakers competed in the Great Roath Bake Off. The shop had been decked out for the occasion in hand-made bunting and there was standing room only by the time the competition kicked off.

Organiser Wayne Courtney is well known locally for organising events and for his support of Roath’s independent businesses.

Wayne getting into the spirit of the occasion

From the start at 5:30 a queue of bakers waited to submit their entries – a massive range of sweet and savouries of all shapes and sizes. Judging was going to be a touch challenge!

Thanks to an earlier post on this site I’d been invited to join the panel – alongside Sara, Nikki and Emma – all food bloggers or bakers (or both).

A Victoria sponge started proceedings and the bakes came through thick and fast over the next hour or so, each one rated out of 10 for taste, appearance and originality. Across the 35 entries we tasted everything from Cookie Monster cake to spinach tart – and even a replica of the Coffi House itself in cake form.

Picking a winner was made very difficult by the standard of the entries.

But before we got on to that, we had to add an extra special prize for a young 6-year old called Silas. He entered a very well baked, bright green sponge cake which he called ‘Weird Cake’ – it was delicious and worthy of prize for the name alone! He said he made it because it’s funny.

Stefanie said: “I made this cake because I’m German and this shows off the German way of making cakes – and it’s delicious.” 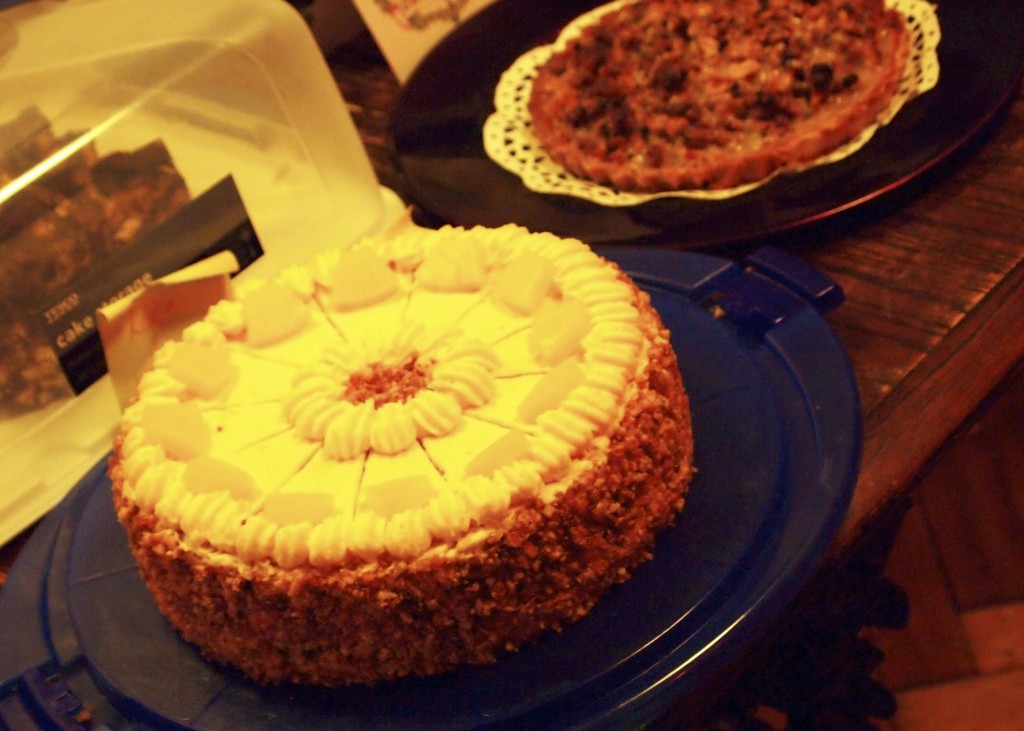 Lisa said: “Yum yum! I love sticky toffee sauce and I love that the walnuts’ taste is transformed with cooking – and they do say nuts are good for you!”

First Prize – Winner of the Great Roath Bake Off 2012 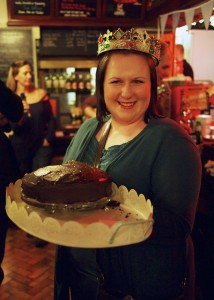 Kate with her winning cake

Kate said: “I’ve never made this before – I only decided to make it this afternoon. It’s the recipe on the cover of one of a recipe book by Gizzi Erskine.”

Kate’s sister Emma came with her to the Bake Off after persuading her to enter at lunchtime.

“I love baking and make cakes all the time. People tell me I should be going for the Great British Bake Off. After winning this tonight, I’m tempted!” she told us.

Kate’s cake had won on taste, creativity and quality of baking.

As the competition drew to a close and the party began, local soul and blues singer Calum Ross took to the stage. He even managed to persuade the multi-talented Wayne to join him for a song.

The Great Roath Bake Off was a great Roath success and – we hope – here’s to next year?

There are more photos in the roathcardiff.net Flickr group (slideshow above) – you can join the group and upload your pictures if you’d like to share them.

Wayne Courtney has written about the Bake Off on his own blog here and Nikki has updated her blog ‘Your Last Mouthful’ with a post and pictures here.

A new microbrewery – Roath Brewery – launches this weekend, selling its beers at the...

What can we expect from Blas? Street Food returns to Roath
April 27, 2016