An Audience with Germaine Greer – The Gate Arts Centre

Arriving at The Gate Arts Centre on the evening of 29th January, I joined a capacity crowd in excited mood, who were anticipating a stimulating and amusing ‘Audience with Germaine Greer’, without a doubt one of the most influential and erudite feminist thinkers of the entire movement. 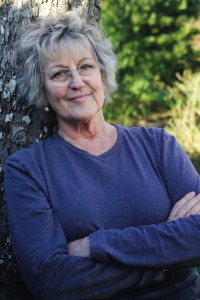 The talk was entitled ’40 Years of Feminism and Fun’, and true to the title, Professor Greer spoke for an hour and a half from her vast experience of the early years of feminism in the 1970s onward, interspersing her thoughts on serious issues such as violence, pornography, body issues and the representation of women, with hilarious anecdotes peppered with her well-known frank language.

Speaking out against violence against all groups in society, and pointing out that children are the most vulnerable people to abuse and harm, Ms Greer advocated the ‘understanding and development of rage’ in the human condition, and that ‘ritual ways to use hostility and anger’ should be considered as a way to deflect these emotions away from harming each other.  She posed the question, ‘How unhappy are we, and why are we so unhappy?’

Moving on to the topic of the ‘bra-less generation’, of which she was a part, Ms Greer expounded on the horror of going ‘to be measured’ for one’s first ‘training bra’ in 1950s Australia, when bras resembled Madonna’s Jean Paul Gaultier cone bras – pointy and with nothing in them.  What, she asked, was the training bra being trained to do?  ‘Sit up and beg? Not to piss on the carpet?’

The conversation segued into an analysis of the representation of the nude in early Western art, and how women were almost always depicted as pre-pubescent and boyish – the forerunner of representing girls and women in advertising who have, for most women, unattainable body shapes.  The disappointment of the ‘70s feminists, finding that their aim to liberate women from uncomfortable and ridiculous undergarments has not led to less pressure on women to conform, was palpable, and Ms Greer admitted that in hindsight they were innocent of many of the issues that have perpetuated this problem.

Discussing the individuality of looks, and how they should be celebrated for being part of a person – particularly deriding the growth in cosmetic surgery to ‘correct’ body parts that don’t need correcting, and with reference to the ‘westernising’ of peoples’ appearance – Ms Greer cheekily told the audience of her disappointment when Tom Jones had his nose reduced in size, ‘his huge conk led to the promise of a huge penis’, and that the new nose just didn’t cut it…

Adding to this that men just don’t care about their own ‘imbalances’ (shall we say) and wouldn’t be bothered to either correct or hoist up their body parts, she urged women to accept themselves as they are.

Citing the rise in, and easier availability of, pornography as a major influence in the development of young people’s attitudes towards themselves and others, the professor called it ‘heartbreaking’ that as a result, both girls and boys are dealing with unrealistic and false expectations, and missing out on the appreciation of the body in all its individuality, as well as subjecting themselves to elective surgery and procedures (‘the Brazilian! Why?!’) in the name of perfection.

Ms Greer told a joke of how a boy, confronted with a woman with body hair, exclaimed, ‘Jeez, hair!’ – to which the girl replied, ‘Well what did you expect, feathers?’ 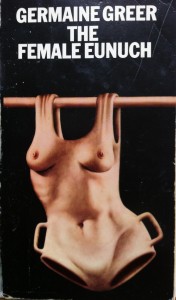 My 25 year old copy of The Female Eunuch

Expounding on her argument with a discussion of the fear girls and women have of being ‘dirty’, whether with regard to their bodies or their homes, Ms Greer noted the common occurrence of a girl moving into a shared house of boys, where she would take it upon herself to do all the cleaning, as it would otherwise reflect on her; and that an array of products are still marketed at women to ensure no-one finds their naturalness ‘dirty’, and which play on their insecurities.

In the field of education, the value to girls of single-sex schools, where they are not ‘an appreciative audience’ of boys was noted, in part so that girls develop their personalities without the pressure to find a boyfriend, and the question was posed, ‘How did girls become so vulnerable to boys?’.  Advising girls and women not to sit around waiting for the phone to ring, or calling the boys themselves (and demonstrating their neediness), Ms Greer exhorted women to have more pride in the polarised emotional ‘field of operations’ between men and women, and to take note of the ‘undemanding fellowship’ that cements male friendships, and develop similar relationships with women.

Heavy criticism of Katie Price ‘winning’ the recent debate on ‘Women and Ambition’ at Cambridge University Union followed, with Ms Greer declaring that Ms Price was living in ‘a nightmare of her own making’, and wondered how she could seem like ‘a winner’ to the young women students.

Concluding her monologue, Ms Greer stated that it was ‘crushing how little has changed’ since the publication of The Female Eunuch in 1970, and that, ‘the world needs to be transformed to be saved…everything must change.’

Questions from the floor followed, covering the role of women in Islamic countries, and how Western women had no standing in influencing them, since we have suffered (in the eyes of many) ‘spectacular degradation’, which will only lead to more fundamentalist reactions; the rise of pornography in music videos, and that ‘pornography degrades everybody’; and the phenomenon of ‘Slut Walks’ – of which Ms Greer was in favour.

The final point was made by woman who had grown up in the Welsh valleys, and, referring back to the agony of being measured for the training bra, noted that where she grew up, the ‘creepy woman with dyed black hair’ who was in charge was known as ‘Mrs Evans, Twin Peaks’.

A fitting Welsh comment to end an evening that had indeed been about ‘Feminism and Fun.’