One of our contributors, Roath resident Lisa Derrick, wrote this lovely post about Roath on her own blog, The Chocolate Takeaway, in August, and we’re grateful to her for letting us re-publish it here as a guest post – thanks Lisa!

In May this year I moved to Roath, an area North East of Cardiff city centre. To summarise for those who aren’t familiar, it has wide tree lined streets, wide swan lined park complete with boating lake, a host of charity shops, art galleries, cafes, restaurants, old-style pubs, and as a result of the previous list of attributes, heaps of character and a community feel. I moved here from Riverside, which lies South of centre, and have been collecting observations drawn from my new surroundings since… 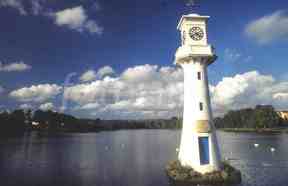 1. I’ve calculated approximately half my time spent in Roath to date has been stood at the crossing between Albany and Richmond Road, dancing the ‘do I, don’t I’ move. Guaranteed on the occasions I disobey the Green Cross Code and Ralph the Police Witch by crossing before the green man says so – a process which takes an interminably long time – a car speeds around the corner, forcing me to run in flip flops, trip a bit, blush, and generally look a fool.

2. If you’re lucky, you can buy marmite for half the usual price in Home Bargains. This is the sole factor which cemented my gran’s approval of my new flat. She had not yet seen the creative arrangement of my furniture, or tasted tea made from Roath provided tap water, but made her decision upon sighting this Mecca of famous brands at cut prices. She favours their biscuits and corned beef; personally it fuels my diet coke habit with cans at an irresistibly low cost.

3. Almost everyone I know in Cardiff has a connection to Connaught Road, one of the aforementioned tree lined streets of Roath. Whether the link is through having personally resided there, having an uncle/best friend/girlfriend/cousin/hamster who lived there, or once going to a party in number seventeen/fifty six/thirty one, it’s a game which never fails. Try with your Cardiff friends!

4. Dave frequents the shops and pavements of Albany Road. Who’s Dave? He is a Cardiff character, who used to be a Merthyr Tydfil character. So, now instead of seeing him around the streets of Merthyr where I work, I pass him on the streets of Roath, en route to Cathays train station. Such is his fame, he was recently featured in Cardiff’s Big Little City exhibition. In a nutshell, he bedecks himself in fancy dress, and sports a sign stating the theme of said fancy dress. Amongst other costumes, I’ve witnessed him as Halloween Dave, (dressed as a devil), and Purple People Eater Dave*, (resembling a human grape). What’s not to like? A mix of interesting characters make a place, and (Fancy Dress) Dave evokes a smile each time I see him.

5. The swans and geese in Roath Park are hungry for human legs.

*I did not see him eating people.

« Heritage Open Days 2011: St Margaret of Antioch Church
deLloyd Designs – behind the scenes at the fashion show for Made in Roath »