In the last in our series on Heritage Open Days, Jessica Best takes a look around St Margaret’s church. 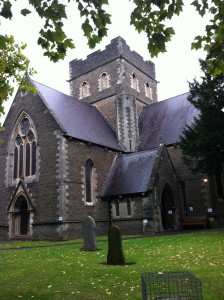 The third and final place I visited on my Open Days tour of Roath was the St Margaret of Antioch church on Waterloo Road.

Christians have worshipped on this site in some form for the last 900 years.

The earliest record of a church here is 1100, when Roath would have been a hamlet with a tiny population.

In 1792 the church fell into the hands of the Herbert family and began to grow in 1800 when John Stuart – son of the former Prime Minister, the Earl of Bute – decided to extend it by building a family mausoleum on the site.

By the 1860s, Cardiff was a major port with an exploding population, and the Grade I listed building you see before you today was built between 1868 and 1870 to accommodate the congregation in the growing suburb of Roath. 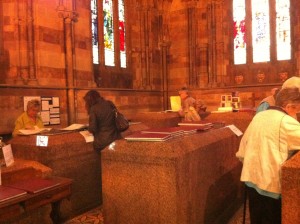 It was designed by John Prichard – the same man who restored Llandaff Cathedral – although his original design for a tower over the south porch never materialised. The church now has a central tower instead, completed in 1927 under the direction of architect John Coates Carter.

A decade after the new church opened, the Bute mausoleum was also rebuilt, and today it still contains the tombs of the 1st Marquess of Bute, his two wives and six other family members.

By 1870 the Bute family had become Catholic, so there were no more burials at St Margaret of Antioch, and the site is unique as it is the only Bute burial place in Wales.

Elsewhere inside the church, you can see the four types of stone John Prichard used to build the church, in an architectural style known as “constructional polychromy”.  Materials include alabaster from Penarth. 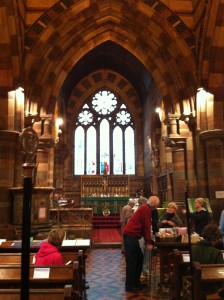 You can also view the WWI memorial, made of stone from the original St Margaret of Antioch, demolished by the third marquess in 1868.

For those able to climb an impossibly narrow and winding stone staircase, followed by an almost-vertical set of wooden steps, a trip to the top of the church tower offers a fantastic panoramic view of Cardiff. 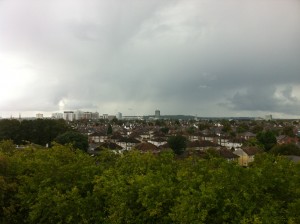 You can also look down below on to the church yard, which contains only a scattering of gravestones, but is actually full to capacity.

Almost all of its gravestones were removed in 1969 as part of a clean up and never returned.

St Margaret of Antioch is open to visitors every Wednesday between 10am and 12pm.