The Pint of 45 Guide to Roath

Pint of 45 – ‘a user’s guide to drinking in Cardiff’ – is one of our favourite blogs. They’ve made a name for themselves locally by taking a sideways looks at the hostelries of Cardiff.

The chaps behind the blog, Ollie (words) and Phil (pictures), have made many an expedition into Roath, stopping off for a quiet lager or two in most of our favourite pubs and bars.

We asked Ollie about the blog and his Roath experiences:

What was the inspiration for Pint of 45?

We were drinking our way down the Reeperbahn in Hamburg (another story in itself) when we had the idea to put together a website that provided a guide to the drinking capitals of Europe. Of course, it didn’t take us long to realise that this was one of the most cost-prohibitive concepts in the history of blogging, so we settled on staying closer to home and covering the drinking holes of Cardiff instead.

Most writing about pubs, both online and in print, tends to be pretty earnest and dull. So it seemed there was an obvious gap for something more playful based around – sometimes only slightly exaggerated – stories of downing huge amounts of cheap, gassy lager, falling into bushes and general dicking about.

In terms of the format, we nicked that from eggbaconchipsandbeans, a brilliant blog on fry-ups that features loads of photos embellished with a handful of wry captions. Admittedly, a lot of our snapshots aren’t amazing quality but I think that posting unstaged, dimly lit pics of pub interiors taken on a phone is actually more revealing than if Phil went in armed with his digital SLR and spent ages making everything look amazing. Although photography purists will probably disagree.

What do you think makes the perfect pub?

One of the things I like about pubs is that they’re all different. They all have their own quirks and nuances. So I don’t have any fixed notion of what constitutes the ‘perfect pub’. All I’m really after is a decently priced pint and somewhere to sit.

That said, ideally you also want music that you don’t have to shout over, no TVs or big screens, bar staff that don’t growl at you, and absolutely no children under any circumstances. A pool table is always a welcome addition but Phil is so hopeless at wielding a cue that the very real danger of someone (ie me) being maimed mid-game doesn’t seem worth the risk. 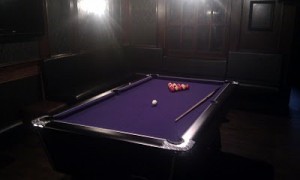 You’ve covered many of the pubs in Roath – what’s been your favourite?

It’s an obvious answer but you can’t go far wrong with The Albany. It’s possibly the most pub-like pub in Roath. They should get rid of the tellies though. 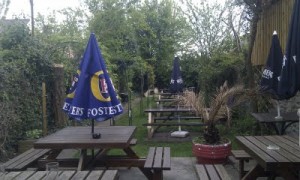 Have you uncovered any ‘hidden gems’ in Roath?

Apparently The Crofts is worth a look these days. When we visited a few months back, it was in the middle of being refurbished – we haven’t had chance to go back yet, but we’ve heard good things. The disco ball-equipped yurt in Milgi’s beer garden deserves a mention too. 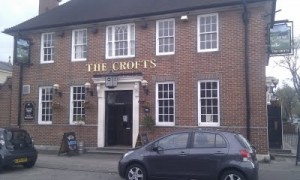 Do the drinkers of Cardiff like having their photo taken?

Ha – good question. We usually check with the bar staff before taking photos, although obviously you can’t go round asking every single person in a pub whether they mind making a cameo appearance on the blog. Fortunately, Phil has developed a knack for being fairly surreptitious in taking pictures, so usually no one really notices. Or if they do, they tend not to say anything.

The only time we ever really ran into trouble was in the Canton Cross Vaults, where they thought we were undercover police officers. That one took a bit of explaining.

What would be your ‘desert island’ pub crawl?

OK, let’s assume that we’re starting in the centre of town and working our way out towards Roath. It’s going to be an early start, so you want somewhere in which you can simultaneously order a cooked breakfast and a pint without the bar staff looking at you all funny. This, of course, means any branch of Wetherspoon, although let’s say the The Great Western, for the sake of argument. We’re not going to be eating again for a while, so go for the large breakfast – all 1,500 kcal of it. It hasn’t let me down yet.

After that, we’ll take a route that roughly zigzags up St Mary Street, encompassing whichever of Wellingtons, Kitty Flynn’s, The Cottage and The Goat Major take our fancy at the time. After that lot, we’ll amble off towards the Pen & Wig, perhaps taking in Cardiff Arts on the way.

Next is Gassy Jack’s and, from there, it’s over to Poets Corner on City Road and then up to The Royal George – the youthful vim of the students will help with the pepping up we will inevitably need by this point. And finally, ability to walk permitting, we’d finish off at The Albany. After which, we’d probably have to go to an actual desert island for two weeks to detox. 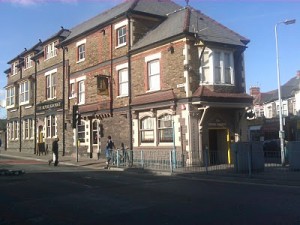 Visit the Pint of 45 blog here.