I attended the opening of this fascinating exhibition at Milkwood Gallery recently, and we’re delighted to publish this guest post by artist Lucy Baker, explaining more about the reasons behind the project and exhibition.

Three artists Lucy Baker, Emilie Collins and Jan Williams have been working on a group project that began a year ago after Lucy discovered the remnants of the Mid-Wales Hospital in Talgarth and asked fellow artists to participate.

Echelon, the artists’ first exhibition as a group, is now showing in Milkwood Gallery. It was inspired by a mutual belief that a greater understanding of mental health can be achieved and the stigmatisation abolished.

A host of associational memories, the former Mid-Wales Hospital dominates the town of Talgarth. With the theme of absence strongly present in their work, the three artists consider the treatment of mental illness, the notions of being exiled, but also the provision of sanctuary and care. Echelon reveals layers of hatching textures that highlight a passing of time, nature’s ability to reclaim, and as the main employer and social venue; the loss of a community’s identity.

In the event of this building reaching a state of disuse through neglect and abandonment, nature’s invasive colonial conquest is accomplished.

In her series of photographs, Lucy is exploring textures, patterns and colours of decay. Light leaks in though numerous windows of the hospital, intersecting enveloping shadows and revealing layers of gathering debris and fungi. Nature, once suppressed by human interaction liberates the space, breaking through walls, unhindered by asbestos air and chemical laden materials. Lucy found this to be reflective of the movement of care into the community in the treatment of mental illness.

The building which previously acted as a respite to its inhabitants now provides a nurturing shelter to new plant life. Lucy’s work indicates a passing of time and an indication that now the building’s purpose is served and its idea abandoned, Talgarth’s guardian walls will perish.

The building’s architecture is not dissimilar to a prison. Its echelon format is encompassing, allowing easy surveillance. Whilst exploring themes of entrapment and exclusion, Lucy’s work is a representation of a host of memories and stories particularly outlined in Discordant Tune.

In Their Hands  by Emilie is comprised of selected pieces taken from a series of performances recorded in several community-orientated spaces in Cardiff. Viewers were invited to care for the artist by feeding her the food present on the table tray. Remaining silent and defenseless, she became to many the recipient for their thoughts, memories and feelings provoked by their participation in the performances which were filmed and edited by Ali Albion.

Responding most strongly to the humane aspect of the project, Emilie took a particular interest in the issues surrounding both institutional and community care. Her desire to experience a sense of vulnerability informed the piece, along with that of interacting with others and provoking an emotional response.

Echelon can be defined as a level of command, authority or rank, which is another key aspect of Emilie’s work as the partakers willingly take charge of her, thus temporarily becoming her guardians. She performed her work In Your Hands at the open evening of the show, inviting viewers to feed her and comb her hair.

In Your Hands, photograph by Sophie Barras, Milkwood Gallery, 2011. 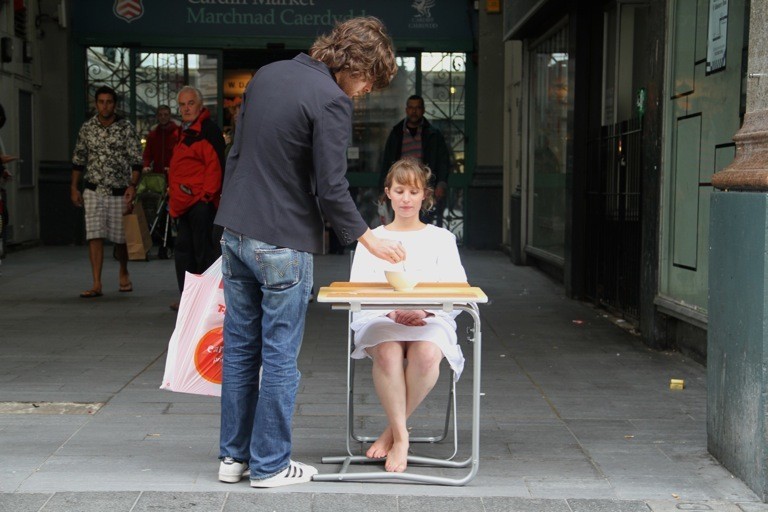 In Their Hands, photograph by Alli Albion, Central Market, Cardiff, 2011.

Through her work Jan explores the relationship between architecture, the human body and mind, with a particular interest in the way that certain buildings can evoke feelings of memory and identity.

The paintings for this exhibition have been informed by drawings done in situ and photographs taken on visits to the hospital in Talgarth.

Using a minimal palette of oil paint on board the paintings are executed in one sitting. The pared down compositions are rendered with subtle areas of light and shade including shadows and shafts of sunlight often permeating through unseen windows. The choice of a limited palette helps her focus on the effect of light in the paintings while evoking an atmosphere of calm that encourages contemplation. 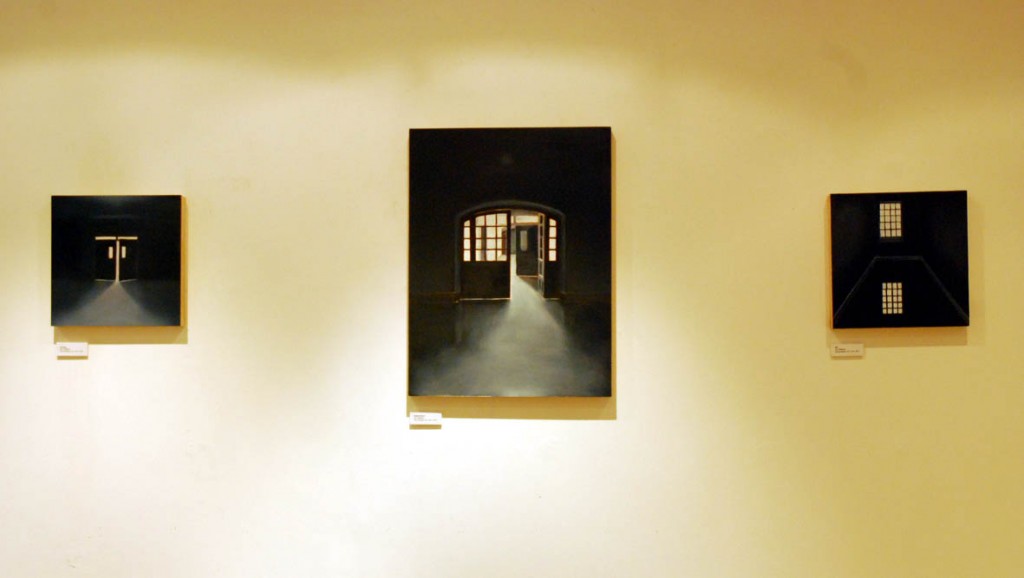 The exhibition runs at Milkwood Gallery; 41 Lochaber Street, Roath, Cardiff until the 16th October. The artists are also showing at Made in Roath. Contact the artists: