Marc Thomas, editor of Plastik Magazine, is introducing a brand new comedy film event at The Gate Arts and Community Centre, starting this Sunday, 2nd October – it sounds a lot of fun!  He tells us all about it here: 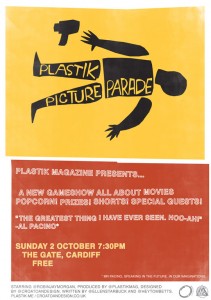 Film is a sadly undervalued love in Cardiff. We’ve got loads of independent film makers but who can name more than 10?

Tom Betts, who runs Moviemaker in Chapter is probably one of the few dozen people who can and that’s why I’m really excited that he’s co-written Plastik Picture Parade.

Plastik Picture Parade, which takes place at The Gate Arts Centre on Sunday 2 October at 7:30pm (free entry), is a new comedy game show all about film. As well as Tom Betts, Plastik Picture Parade was written by Ellen Waddell, who writes a monthly column on Plastik Magazine (http://plastik.me/category/pedantic-about-film/). It will be presented by Robin Morgan who also writes a column on Plastik (http://plastik.me/category/dick-whittington-and-other-aspirations/) and was designed by Adam Chard.

We wanted to create an event that people could really engage with rather than just ‘going to a film event’. That’s why we’ll be picking two people from the audience to make up our panels and also generally involving everyone with a comical approach to film.

There’ll be popcorn, prizes (the event is sponsored by DizzyJam (http://dizzyjam.com)) and a nice little cameo by one of our favourite local musicians who has written a song and recorded a video especially for the evening.

Altogether, it’s going to be a great evening and set in a lovely Roath venue. We couldn’t be much more excited about it.

Plastik Picture Parade takes place at 7:30pm on Sunday 2 October at The Gate Arts Centre, Roath. Entry is free but donations are welcome to cover costs.